Wien’s finest, protecting & serving fascists by shutting down anti-fascists while allowing fascists to  publicly march in the streets.

The gif of the incident tells the entire story – a fascist goon in Wien chooses a much smaller anti-fascist as his target at an anti-fascist rally and aggressively goes after them, not anticipating that the antifa would effectively defend themselves with a decent left hook!  Anyone can see who the aggressor is here and who was defending themselves.  But of course that wasn’t good enough for the police, who charged the anti-fascist for failing to leave the scene before being attacked!  And it apparently wasn’t good enough for the courts, either, who convicted our friend!

If you’ve been following our activities, this shouldn’t come as any surprise – the police and the courts seem to think their role is to prosecute anti-fascists while enabling fascist violence – that is when the police aren’t directly involved in attacking antifa themselves.  Does that sound hyperbolic to you?  Take a look at this list of police attempts to harm anti-fascists we published two years ago.  Or ask yourself: when is the last time you heard of the police tear-gassing or pepper-spraying or firing rubber bullets at or beating fascists like the KKK or the Proud Boys, etc.? 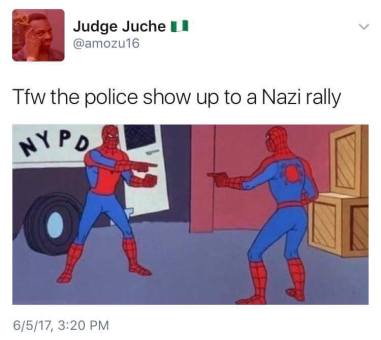 So our friend in Wien – who now is faced with paying heavy fines and legal costs for the “crime” of defending themselves against a fascist clearly bent on attacking them – isn’t the first anti-fascist criminalized by a legal system hell-bent on facilitating fascist violence and they won’t be the last.  But we’re here to support our friends whenever they are attacked – by fascists without badges or by fascists with badges – for as long as we have funds available to do so.  Please make sure we’re always around to do this work and stand in solidarity with anti-fascists criminalized by the courts by making a contribution today.

You might recall a case from this past spring where we sent some money to an antifascist in Lüneburg, Germany to help him mount a defence against charges he received for flying the flag you see in the image above.  The prosecutor in that town somehow got the idea that flying this particular flag was against the law and charged our friend for doing so.

We’re all quite certain the prosecutor’s intent was to have our friend plead down to a lesser sentence, pay a simple fine, and be done with it.  What they didn’t account for our our friend’s determination to not allow the German state to criminalize antifascism and solidarity with the Kurdish people and the revolution they are fighting for in Rojava.  So instead of accepting a plea deal, he demanded a trial, and we helped to make sure he had all the legal resources he needed to mount an effective case in court.

How effective a case?  We got the news yesterday: the judge threw out all the charges against our friend and acquitted him!

Because our friend had all the legal resources he needed to make his case, he’s walked free and the attempts by the state to make support for antifascism and the Rojava revolution a crime have failed.  Because we were able to provide him with a chunk of the necessary funds, he had those legal resources to fight his case and win.

So if you have ever contributed to the Defence Fund, please know that this victory is also your victory.

And if you haven’t ever contributed to the Defence Fund, today’s the day to change that!