We all know that no one – NO ONE – is a bigger defender of free speech than a neo-nazi politician like Austria’s Heinz-Christian Strache (mind you, that might be due to the tendency of bigots to be the biggest “free speech” champions).  Whether exercising his free speech rights in his early years by leading a mob of neo-nazi boneheads in an attempt to storm a Jewish synagogue or playing soldier in the woods with gun-toting white supremacists or holding events to commemorate nazi war criminals, Strache has perhaps chosen some peculiar ways to demonstrate his reverence for free speech over the years, but no one could question his commitment to being allowed to dehumanize Jews and Muslims and refugees and racialized people, etc. as a matter of “free speech.

So when Austria’s Left Turn Now! made a video in which Austrians tell Strache to fuck off, one would have thought Strache would applaud their use of their free speech rights.  But noooo!  Instead, Strache filed a slander lawsuit against Left Turn Now, demanding compensation for the “damages” they caused by telling him to fuck off.  Between this and Lucian Wintrich’s assault on a woman when she took him up on his defence of his own free speech by literally grabbing a copy of his speech, we’re beginning to wonder if racist scumbags only care about free speech when it’s them trying to peddle genocide as a good idea.  But we digress!

The good news: the judge who heard the case decided against Strache, calling his whiny lawsuit “snivelling.”

The bad news: defending oneself against a slander lawsuit, even one as frivolous as Strache’s, costs money.  So Left Turn Now have set up a donation page to help them pay for the costs of this absurd, hypocritical action by Strache.

This is Katie (and her pup!).  Katie works with students at a community college in Connecticut.  This fall, Katie heard that racist troll Lucian Wintrich was going to speak at the University of Connecticut.  Like most of us, we assumed that would be him standing in a parking lot, probably near a dumpster or something for camouflage.

But nooo!  The U of C not only refused to support a “no platform for racists” policy; they quite literally gave this bigoted loser a platform to speak from: a stage, a theatre, a lectern, hired goons to protect his scrawny ass – the whole thing.

Would they listen to their own students & faculty about why they shouldn’t be graciously providing this platform to this white supremacist nobody?  No they would not.  Did they care one whit about the danger they were placing their own students and faculty in by facilitating a hate rally on-campus, particularly in light of the shooting at the University of Florida after a similar hate rally the month before?  Apparently not.

So when the U of C wouldn’t do the right thing and the cops showed up to protect this racist weiner at his own event, Katie & some friends did what needed doing: they showed up to confront the creep, so he & his ilk knew they were not fucking welcome there.

One of the highlights of the event was when someone took the “free speech” arguments of the night literally and grabbed Wintrich’s cue cards right in the middle of his blathering.  This made Wintrich fly into an apoplectic rage and we jumped from the lectern and demonstrated his racial superiority by physically assaulting Katie in front of the whole crow.

The kkkops charged both Katie and Wintrich, although Katie literally had her backed turned to Wintrich and was walking away from him when he attacked her.  They dropped the charges against the racist dipshit but are continuing with charges against Katie.

Katie’s cowardly employer responded not by standing with her in solidarity but by putting her on paid suspension and threatening her job.  So now she has to fight both the state and her own employer, when she’s not busy fighting bigotry and hatred.

We were happy to send Katie some money to help tide her over and pay her lawyer’s bills and we highly recommend you do the same.   Solidarity only means something when we’re willing to stand up for each other when we really need to. 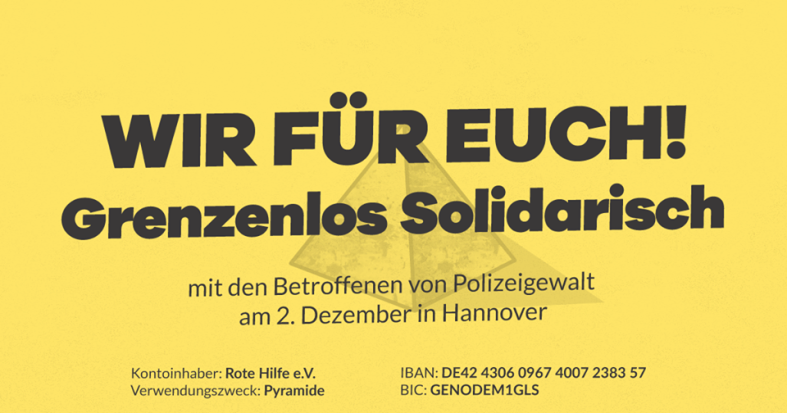 Never underestimate the power of a pyramid!  Antifascists in Hannover harnessed the ancient power of this enigmatic geometry on December 2nd when they blocked the route to the racist AfD convention by hauling a giant metal pyramid into the middle of the access road and then chained themselves to it for good measure.

This is actually a fairly typical tactic in Germany and the police are well-used to dealing with it.  Normally, this involves an assessment of whether or not the activists can be safely detached from the structure they’ve secured themselves to, then bringing the necessary equipment, etc.  All of which ordinarily forces whatever was coming down the road to re-route.

Maybe it was because Hannover antifa were challenging Germany’s most bigoted political party or maybe it was because the police felt emboldened and free to act out their own xenophobic political beliefs, but instead of following the normal procedure, the cops elected to beat the living hell out of the locked-down antifa, who were unable to offer any sort of defence or resistance to the punishment the cops doled out.

As a result, one antifa had their tibia fractured and protruding from their leg in two places – something that would require a considerable amount of force to achieve.  Others suffered a litany of hematomas, abrasions, contusions, and other injuries.  To literally add insult to injury, the police tried everything they could think of to delay the arrival of an ambulance to deal with the serious and life-threatening injuries they had caused, then charged the antifa they brutalized with assault, coercion, and resisting arrest.

All of this means that our friends in Hannover are facing a triple threat of repression – having to pay for medical bills, having to take time off work to recover from injuries, and having to mount a legal defence against the charges the cops have fabricated against them.  They’ve issued a public call to help them accomplish all three things and The International Anti-Fascist Defence Fund heard and responded to that call today.  We’re strongly encouraging others to follow our example and send a donation to our friends in Hannover; we’re also strongly encouraging everyone to make sure the Defence Fund is always there and ready to help out antifa by contributing to it today.

Sometimes the consequences of standing up to hate aren’t so cut-and-dry.  Sometimes new complications and circumstances pop up right when you think you’ve taken care of everything.

This was the case recently in the Twin Cities with the couple we helped out last month.  Turns out that, while our help was well-appreciated by them, they had underestimated what they’d need to set things right again after being targeted by fascists.  So they came back to us to request some additional help.  After some discussion, we figured out how we could help them and we’ve done so today.

We received word that after a fascist bonehead in Montréal had to suddenly deal with urgent health care issues, two anti-fascists in Montréal found themselves in a bit of trouble.  Fuck that fash dude, but in the meantime our two friends had some serious consequences befall them that made it hard for them to make rent, pay their bills, and defend themselves from those consequences.

If it seems that we are being deliberately vague here it’s because we are; there is still potential for further trouble for our two friends so we don’t want to say too much lest we make things worse for them.  Suffice to say that, after confirming details we aren’t able to publish at this juncture, we had a discussion and came to consensus that The International Anti-Fascist Defence Fund should lend a helping hand, which we did last week.  We wish our two antifa friends all the best and hope that their troubles will soon be behind them!

How was your fall?  Ours was really busy.  Here’s what The International Anti-Fascist Defence Fund got up to over the past three months:

Naturally, none of this came cheap.  The Defence Fund is now spending an average of $2200USD per month to support anti-fascists and anti-racists the world over, right when showing solidarity with them really means something.  This of course means that we need to raise $2200USD every single month just to sustain the level of support we’re currently providing, and that’s assuming that things don’t get any worse than they are now.

Take a look at that list of what we accomplished over the last three months.  We kept badly-injured antifascists fed and housed.  We helped a YPG fighter get out of a war zone. We took care of an antifa’s family while he’s locked up.  And we helped pay for the legal defence of over 200 antifascists in DC and Richmond.  If these sound like the kinds of things you wish you could do too, we have good news for you: you can by donating whatever you can afford to The International Anti-Fascist Defence Fund.    Whether it’s a one-time contribution or you want to pick up some of our antifa merch or pledging a buck or two a month to defend your fellow antifa would not be a problem for you, your support = what helps us continue to support them.

Hold a fundraiser.  Hit up your friends.  Pass the hat at a show.  Download our flyer and pass it out.  If everyone contributes a little bit, we can keep doing what we’ve been doing for the last 2.5 years.