If you’re antifa in Sweden, you’ve heard of Joel – the antifascist that defended a women’s march from knife-wielding white supremacists and served a serious prison sentence for his troubles.  Joel’s been out for a while now and his support group just released this statement:

It’s been a little over 6 months since Joel got out and the fånggruppen that held in the campaign now want to thank you who supported us and Joel in these years.

We would like, first of all, to thank all of you who have in any way heard from us and contributed to practical or economic help, but also thank you to you who wrote to say that we are doing a good job. Thank you!

We should continue to thank you for the great support we have received from abroad; it has really meant a lot to us. It is good to know that there is great international solidarity and we hope that we, too, have shown that solidarity when you need it.

Of course, we want to thank the people and organizations in Sweden who supported Joel and us. We are eternally grateful!

We will now end the campaign and use the page to continue to work. Finally, a thank you from Joel himself:

“Many thanks to everyone who contributed to the free Joel campaign, everyone who wrote letters and sent in stuff. Thank you to all the groups who supported and spread the word, above all thanks to AFA Stockholm and an even bigger thank you to fånggruppen Stockholm.

A big thank you to my family! And thanks to those who set up for my family without you, it would have been hell. I love you.

Thank you also to all those who are fighting in the fight for a fairer world.

Don’t forget that it’s never possible to live on old merit, class is ongoing. Organize yourself!”

If you contributed to The International Anti-Fascist Defence Fund in 2015, part of your donation went to helping Joel, so this thanks goes out to you! 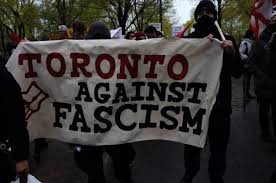 In Toronto at least, it’s abundantly clear that the police protect the nazis.  This has been apparent at several heavily-policed events over the last two years there and is becoming so extreme that it’s hard to tell if the people harassing and assaulting antifa counter-protestors at rallies held by Islamophobes and bigots are the nazi rally participants or the kkkops in the Toronto Police Service.
Such was the case at the April 28th Pegida Canada rally at Toronto’s city hall.  The two dozen or so usual suspects on the Islamophobe side were not just protected by the cops, but were also enabled by them.  For example, when one of the bigots attacked an anti-fascist, knocking him to the ground and kicking him in the head, the po-po were quick to separate the sides and take the attacker to the sidelines for a smoke and a chat, but not to arrest him.  But when the nazi assholes decided to attempt to hold an impromptu and unpermitted march through the downtown streets and antifa peaceful stood in front of their route to prevent that, the police waded in with pepper spray and billy clubs, assaulting the antifa counter-protesters so an illegal nazi march could proceed.
At least one anti-fascist, P., now faces absurd charges of assaulting a police officer and being “masked with intent.”  P reached out to us to ask for some legal defence support and we decided without hesitation to offer our support to him.  We wish him the best of luck beating these fabricated charges issued by the cops with the clear intention of deterring people from coming out to oppose Islamophobes and racists organizing to commit violence in their communities.
Cops and the Klan go hand-in-hand.

Loyal followers might recall that time back in 2016 when we helped pay for the legal defence of three Austin anti-fascists that had been arrested for the “crime” of removing racist graffiti from the University of Texas and making alt right creeps feel, well, unwelcome there.  Our three friends were facing years in prison for doing the campus community a favor.

Here we are almost 18 months later and we were happy to receive the news that all three of them have had all their charges dropped.  In the words of Red Guards Austin, “We want to especially thank those who donated to their legal funds. Without such generous donations, we would not have been able to afford their legal team. We can’t say enough how much countrywide and international solidarity means for the comrades here in Austin who face decades of prison time between them all. We will continue to fight, we will continue to win, and we will never apologize for our politics, nor will we dial them back in fear of repression.”

If you made a donation to the Defence Fund before 2017, some of your money helped get these charges dropped and our three friends go free, so pat yourself on the back today!

If you have never made a donation to the Defence Fund, or haven’t made one in a while, there’s no time like the present to do something concrete to support anti-fascists around the world by donating!

This was a tough one for the Decisions Crew here at The International Anti-Fascist Defence Fund.  The good people @ Yogyakarta, Indonesia’s Libera Community Space wrote to us looking for help to expand their space.  We know they do excellent work, including anti-fascist work, so this led to a lively discussion and, in the end, to a close “no” vote to offering support.

On one hand, we’ve supported squats and anarchist spaces that engage in antifa work before.   When Prague’s Klinka centre was attacked and firebombed by fascists, we sent them some money to help with repairs.  Then, when members of the De Vloek squat in the Netherlands were evicted and arrested, we helped them with their legal defence.

So why would we help those two community spaces out by say no to Libera’s request?  Ultimately it came down to the fact that Libera had not been harmed by fascists as a result of their antifa activities or support for antifa activities.  This is The International Anti-Fascist Defence Fund, not the International Helping Develop Anarchist Community Spaces Fund (but we think someone should definitely start that up!) and we need to keep our powder dry so to speak in order to be able to offer substantial material support to anti-fascists and anti-racist precisely when they need us to have their backs – when they’re under attack or suffered some loss as a result of their antifa work.

We still think the Libera project is an excellent one and we would encourage anyone that wants to see autonomous community spaces take root in Indonesia to make a donation to them.