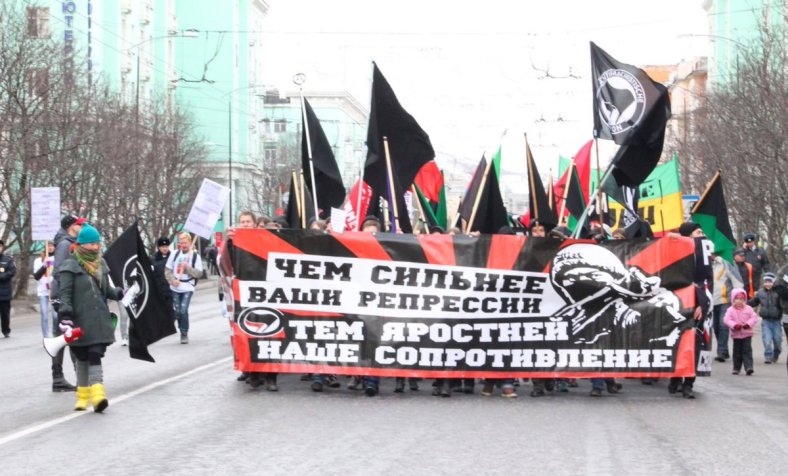 It’s no secret that the Russian state has been targeting Russian anti-fascists in recent months.  Since the fall, Russian state agents have kidnapped and tortured several anti-fascists and anarchists in an attempt to fabricate a “terror network” to justify more kidnappings, torture, and repression.  This is entirely unsurprising in a state where those same actors are alleged to have deliberately bombed an apartment complex in a false flag operation used to justify a crackdown on human rights in Russia.

On the ground, this has meant that life is tougher than ever before for Russian antifa, who’ve never had it easy to start with.  It is in this context that we received a request for support from two Russian anti-fascists whose close friends had been kidnapped and tortured by the FSB (the successor agency to the KGB).  Shortly after this, the two of them noticed that they were being surveilled by the state wherever they went.  Then came the harassing phone calls from unknown callers.

Not wishing to hang around and see when FSB goons would force them into a car and “disappear” them, our two friends decided to flee to another country.  While there, contacts inside Russia told them that the FSB had been interrogating associates about them.  Their temporary home in another country now looks to be where they will not be seeking permanent refuge.

The two anti-fascists requested support for basic living expenses and to take care of some outstanding medical conditions they were being treated for in Russia but do not qualify to receive paid treatment for in their host country (so much for the old racist lie about refugees getting everything for free!).  There was some discussion about this; given that the medical conditions weren’t a consequence of anti-fascist action, some members of the Defence Fund’s Decisions Crew were questioning the appropriateness of providing assistance.  But in the end, a large majority agreed that were it not for the fact that they were forced to flee their home due to a legitimate fear of persecution because of their anti-fascist activities, their medical conditions would’ve been treated in Russia.  Therefore, it made sense to send them some support so they can stay healthy and safe in their new home, which we did.

We wish our friends удачи!

2 thoughts on “From Russia With Love”