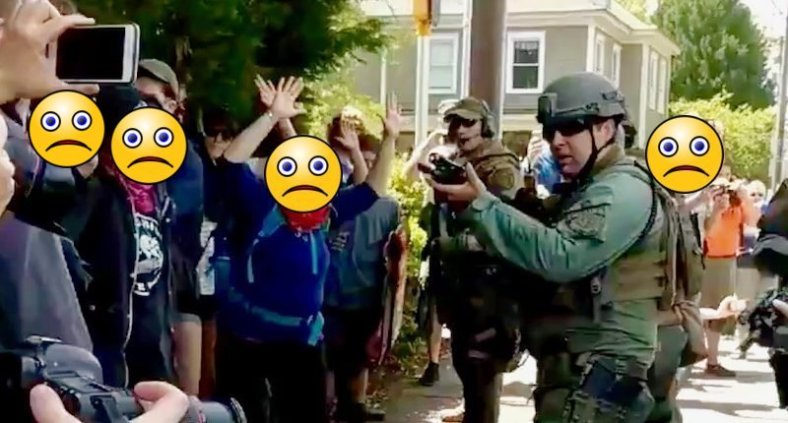 Police in Newnan, Georgia respond to the dangerous threat of non-violent, unarmed people wearing masks by pointing assault rifles at them, April 21, 2018

“No Good Deed Goes Unpunished” should replace “To Serve And Protect” on cop cars in Newnan, Georgia.  This was certainly the lesson imparted on K, one of dozens of anti-fascists that arrived in that town on April 21st to counter a march of less than three dozen full-on neo-nazis.  Also in town to ensure that literal nazis were able to march unimpeded through American streets were at least 400 heavily-armed cops  (that’s right, about 10 cops for every single nazi shitbag in attendance; other estimates putting cop numbers that day at 700-800).  The actions of the cops that day were characterized by one journalist on the scene as “the most over-aggressive policing I’ve ever seen.”

When the cops encountered antifa wearing masks, their response was to point assault rifles at them.  That was the point that K decided the cops were getting out of hand, took off her mask, and tried to speak directly with the cops in an attempt to de-escalate a potentially lethal situation.  Her reward?  Being slammed to the ground and tackled by cops and hauled away under arrest, held in jail for 30 hours, and being fined.

As a result of trying to stop a police riot from claiming the lives of her friends and neighbours, K. has been left with a fairly hefty lawyer’s bill and a small-ish court fine.  She reached out to the Defence Fund for some help with this costs and we’re happy to say that we were able to help her with about 40% of her costs.  If we had enough money, we would have gladly paid the full tab.

Help us makes sure we can pay the full tab for the next K. that comes to us after being harmed for trying to stop their friends and allies from being murdered by the cops or for standing up to nazis literally marching in the streets – make a donation to the Defence Fund today!

One thought on “The Price Of Peacemaking”