For eight years, Corey Menafee would go to his job in food services at Calhoun College and be faced with some of the ugliest historical reminders of the slavery and genocide his ancestors were subjected to.

Calhoun College – run by Yale – is named after pro-slavery advocate John Calhoun.  Students and staff alike ran a principled campaign to convince Yale to change the name of the college.  In April of this year, Yale chose to ignore their pleas.

And so, every day that Corey punched in and began his shift, he’d face historical portrayals of the “happy” slaves in the cotton fields, etc.  Until one day this July, when he finally decided that enough was enough and took care of one particularly egregious stained-glass window.

“I took a broomstick, and it was kind of high, and I climbed up and reached up and broke it,” he told the New Haven Independent. “It’s 2016, I shouldn’t have to come to work and see things like that.”

No one should be forced to face racist propaganda as a working condition.  Corey should have been applauded for doing what needed to be done.  Instead, he lost his job and was charged with felony offences.

Yale is beginning to understand that the optics of their response to Corey’s anti-racist direct action is not good for them, but Corey’s employment and legal situation both remain uncertain.  We wanted to do our part to make sure that neither Corey nor his family suffers because of his brave actions, so we’ve contributed to his defence.  You should do that same!

17-year-old Abdul Juma is a black Muslim living with is family in San Diego.  At a party marking the end of the school year, a pack of five homophobes starting harassing a trans student from Abdul’s high school.  Abdul did the right thing and stuck up for his schoolmate, who he didn’t even know personally.  A fight broke out, knives were drawn, and Abdul’s finger was severed.  When police arrived, they of course let the homophobic cowards go free and charged Abdul.

Abdul’s family was able to post bail, but now instead of graduating high school and moving forward with his life, he is now facing felony charges and combined legal/medical bills of nearly $40,000.

Standing up to bullies and defending trans people is something that should be applaued, not prosecuted.  We were happy to donate some money to help pay for Abdul’s lawyer and his medical bills.  You should kick in some cash, too. 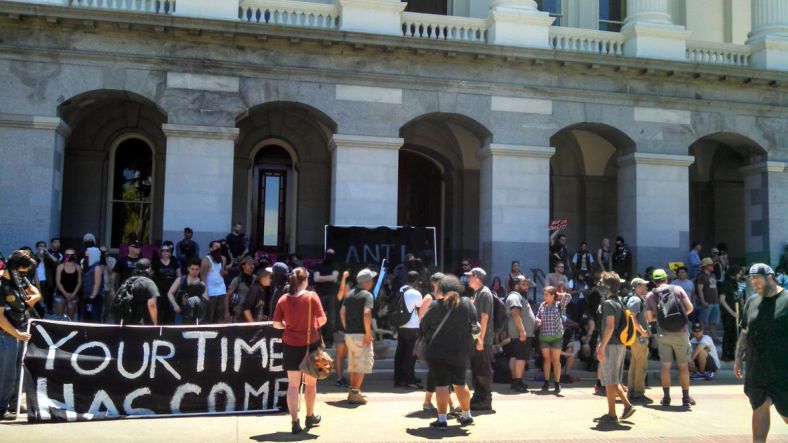 By now most of you will have heard about the neo-nazi rally scheduled for June 26th in Sacramento that was foricbly prevented when hundreds of anti-fascists and anti-racists took the rally point from the bigots and then ran them out of Sacramento.

The bad news for the good guys was that nazis aren’t above stabbing people and nine antifa were hospitalized – mostly with stab wounds.  Hospital visits are tremendously expensive in the U.S., so we were happy to be able to contribute to the fund set up to help defray some of these costs.