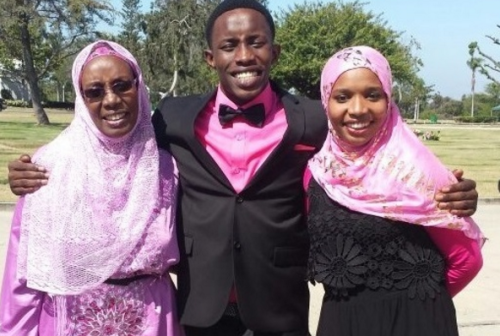 17-year-old Abdul Juma is a black Muslim living with is family in San Diego.  At a party marking the end of the school year, a pack of five homophobes starting harassing a trans student from Abdul’s high school.  Abdul did the right thing and stuck up for his schoolmate, who he didn’t even know personally.  A fight broke out, knives were drawn, and Abdul’s finger was severed.  When police arrived, they of course let the homophobic cowards go free and charged Abdul.

Abdul’s family was able to post bail, but now instead of graduating high school and moving forward with his life, he is now facing felony charges and combined legal/medical bills of nearly $40,000.

Standing up to bullies and defending trans people is something that should be applaued, not prosecuted.  We were happy to donate some money to help pay for Abdul’s lawyer and his medical bills.  You should kick in some cash, too.