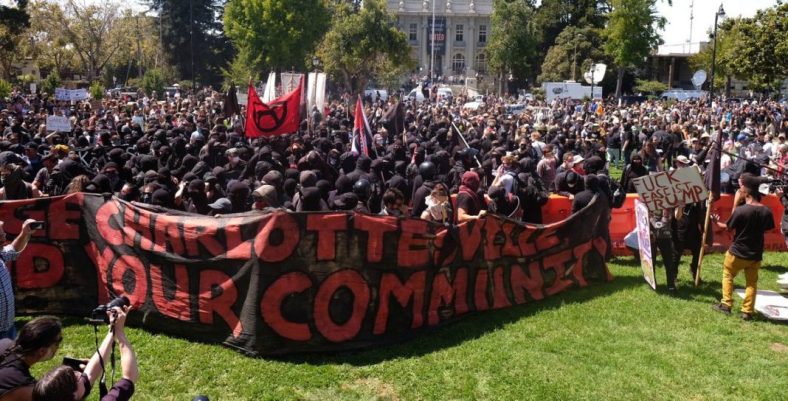 It’s been a crazy, crazy summer, hasn’t it?  Antifa went from being an obscure movement of people willing to actually stand up and defend their communities from white supremacist terrorists to being the “it” topic of the summer.  This was largely because of the unprecedented wave of violence and killings committed by racist extremists this year.

Incredibly, “moderates” and the mainstream media reacted to this not by condemning the wave of racist terror unleashed, but by condemning those courageously opposing it!  Fairness and Accuracy in Reporting surveyed the coverage of this after the white supremacist terrorism in Charlottesville and found that the media was slightly more-likely to condemn “antifa” as it was the fascists that murdered nine people this summer.  Whether this was due to their own tendencies to rely on the logical fallacy of false equivalence or whether it is the influence of the Russian false news & disinformation apparatus that contributed to Trump’s election victory now turning its sights on antifa, much of the mainstream media are now parroting the talking points of neo-nazis and racist extremists – right down to referring to them by their preferred euphamism of “white nationalists.”

The police, who liberals tell us to rely on to stop this, openly collaborated with the bigots in Portland and stood aside and did nothing as KKK leaders shot at racialized people in Charlottesville.  More than ever, it’s become clear that we can’t expect liberals or their institutions to back us up as armed racist extremists literally march through our streets.

So that was the context antifa found themselves in this summer.  Counted on to defend their communities and literally save people’s lives more than ever, but expected to do that on their own and face condemnation and police repression for doing so.

The International Anti-Fascist Defence Fund is one of the only means of support and solidarity that anti-fascists and anti-racists can count on to have their back when they put themselves on the line against hate and have to deal with the consequences.  So while antifa had to ramp things up this summer, so did the Defence Fund.  Over the last three months the Defence Fund donated over $6000USD to more than a dozen anti-fascists and anti-racists – more than the Defence Fund gave out in its first two  years combined!  The money went to bail, legal fees, medical bills and, in one tragic case, to support the surviving daughter of a committed anti-fascist that was murdered by Daesh (aka ISIS).

If things continue at the pace of this past summer, the Defence Fund will have been called on to support twice the number of anti-fascists and anti-racists that we helped out in 2016.  It would also mean that the Defence Fund will be completely tapped out before the end of this coming winter.

You might not be the kind of person that is going to stand face-to-face with armed bigots marching through your town to try to shut them down.  You might not be the kind of person willing to publicly condemn hate when it rears its ugly head and threatens you, your family, your friends, and/or your neighbors.  But that doesn’t mean you can’t support the people who are that courageous.  Donating to The International Anti-Fascist Defence Fund is probably the most effective way to do that.  SOLIDARITY IS OUR WEAPON!

One thought on “September 2017 – Quarterly Report”