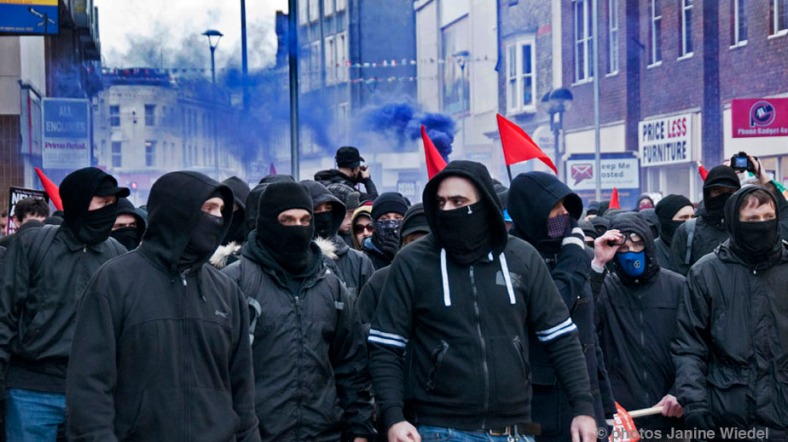 (above: antifa take the streets, Dover, January 31, 2016)
This past January, Michelle Smith – a single mother & union official – traveled for hours from one side of the UK to the other in order to stand with the people of Dover in opposition to a neo-nazi mob that intended to march through the town.  Hundreds of anti-fascists joined her and dealt the bigots heavy losses throughout the day.  Michelle herself was directly threatened by a racist coward and did what she had to do to defend herself and the town of Dover from their hatred & violence.
Weeks later Michelle was shocked to discover that she herself was facing criminal charges as a result of her heroic actions that day.  Worse still, Michelle was convicted this summer of “violent disorder” and received a very severe 12-month sentence for the “crime” of defending Dover from racist scum.
Here at The International Anti-Fascist Defence Fund, we believe two things: that fighting fascism is a social responsibility, not a crime and that solidarity is our weapon!  With both those truths in mind, we were happy to send the Merseyside Anti-Fascist Network some money to help support Michelle and her young family while she’s locked up.  We would encourage you to do the same (when you make your donation, please indicate in the “additional instructions” window that your donation is to support Michelle).  We very much look forward to the happy day when we can celebrate Michelle’s release.

One thought on “The Hero Of Dover”